Summary of the capabilities of the program PCSheetPileWall

With the aid of this program the displacements and the force distribution of a sheet pile wall construction can be calculated.

For stress checks both classic safety coefficients and  u.c.- values according Eurocode 7 (EN 1997-1) are supported

The figure below gives an impression of options present into the sheet pile wall program. 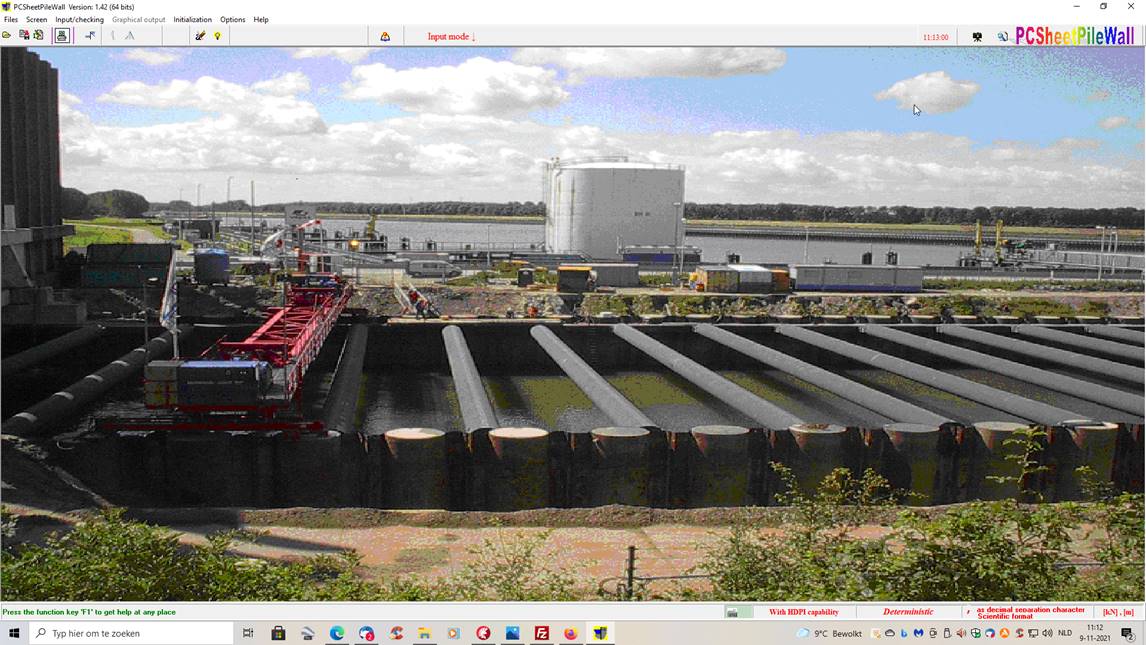 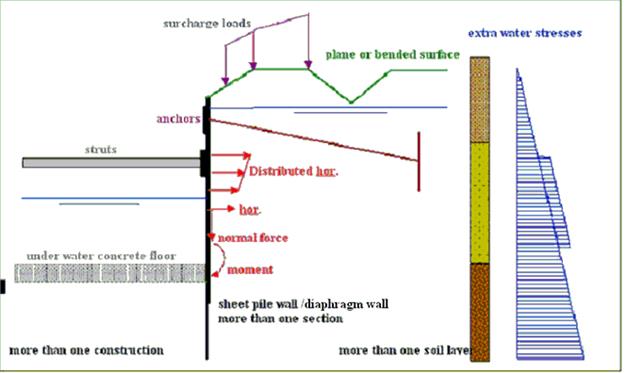 Impression of the per construction phase calculated moment, shear force and displacement distributions.

Impression of the per construction phase calculated water and total pressure distributions  at the left and right side of the sheet pile wall.

A further outline of the capabilities of the program:

The program has the capability to locate the top of the sheet pile wall, the place of anchors, soil layers etcetera according two different systems of axes.

a. Vertical axis pointing downwards. The zero point is the top side of the sheet pile wall.

b. Vertical axis pointing upwards. The zero point is that of the national surveying system of levels.

The sheet pile wall in vertical direction can consists out of more than one section with different values for the moment of inertia and elastic modulus.

The default acting width of the sheet pile wall is 1 m. This values can be decreased, by which graduated sheet pile walls can be calculated for example.

Further the program has a design option by which the length of a sheet pile wall from a entered start length and with a certain step size by the program will be enlarged automatically.

For the input of the section properties of a sheet pile wall these can be loaded from a standard library of commercial available sheet pile sections included.

The program has the ability to calculate the cross-section properties of a so called combi wall, existing of circular shaped tubes with standard sheet pile sections in between.

Dependent of the choice made the surface level can have different shapes per construction phase:

a. Surface level is: horizontal and plain

b. Surface level is:  sloping and plain

The program has no preference with regard what will be entered al the left of right side of the sheet pile wall.

The excavations at the 3 figures above could have taken place at the right side also.

From the entered (ground) water level to below a hydrostatic build up of water stresses takes place.

The volume weight of the water is by default 9.81 kN/m3, but this can be changed by the user when needed.

Per entered soil layer, in relation to the hydrostatic stress distribution, an extra under or over water pressure can be entered if necessary; provided that this option is switched on.

The under and over pressures can be entered.

Dependent on the choice for the kind of surface level (see at preceding point 3) different kinds of surcharges acting onto the surface level per construction phase can be entered at the left and/or right side of the sheet pile wall.

Further at an arbitrary place onto the sheet pile wall a vertical line load can be placed.

Per construction phase the following horizontal acting entities can be entered:

- anchors (or struts) with an anchor bulkhead when needed; prestressing and a maximum load capacity can be entered

- moments acting at a certain onto the sheet pile wall

Dependent on the choice at various setups the strength and stiffness properties can be entered at a different way.

- the user does enter the friction angle and the angle of wall friction per soil layer apart; the program does calculate the needed horizontal active, neutral and passive effective stress coefficients (labda values) from it

- the user does enter the horizontal active, neutral and passive effective stress coefficients (labda values) directly into the program.

The choice can be made for a linear course of the spring stiffness between the active and passive displacement or a non linear course (tri-linear).

The values of 50% and 80% are the default values; these can be changed by the user however.

The input of data into the program is divided into the next parts.

8. Diaphragm walls (made of concrete)

With the entered properties of a concrete diaphragm wall the cracked bending stiffness will be calculated by the program (a so called M-N-K diagram). 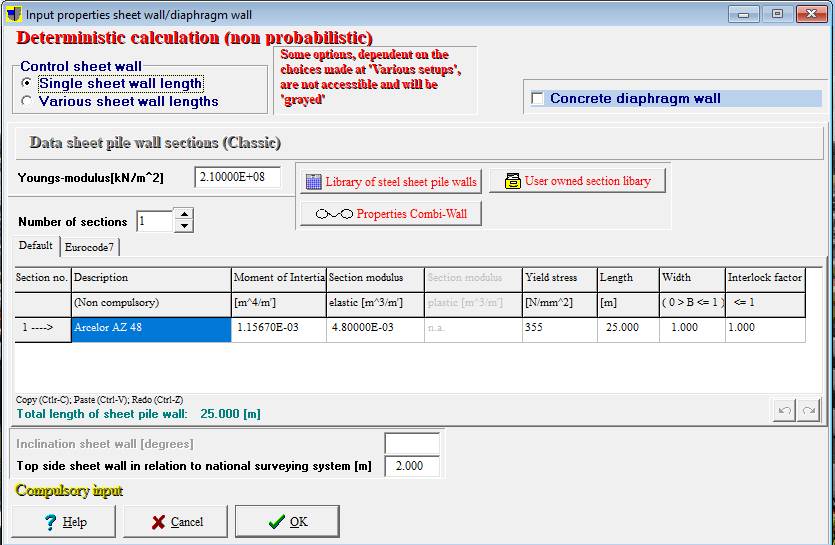 Input of properties of diaphragm wall 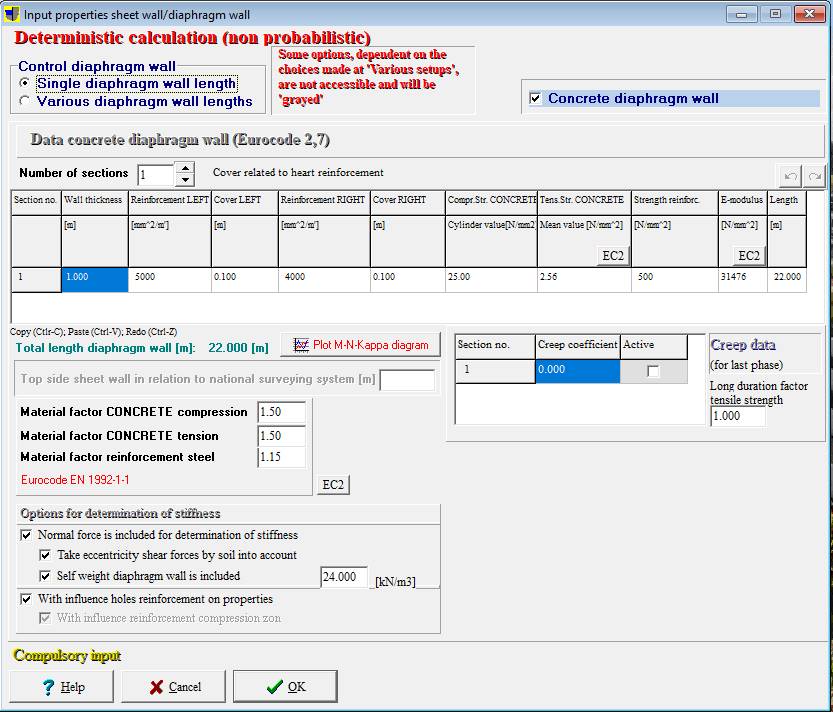 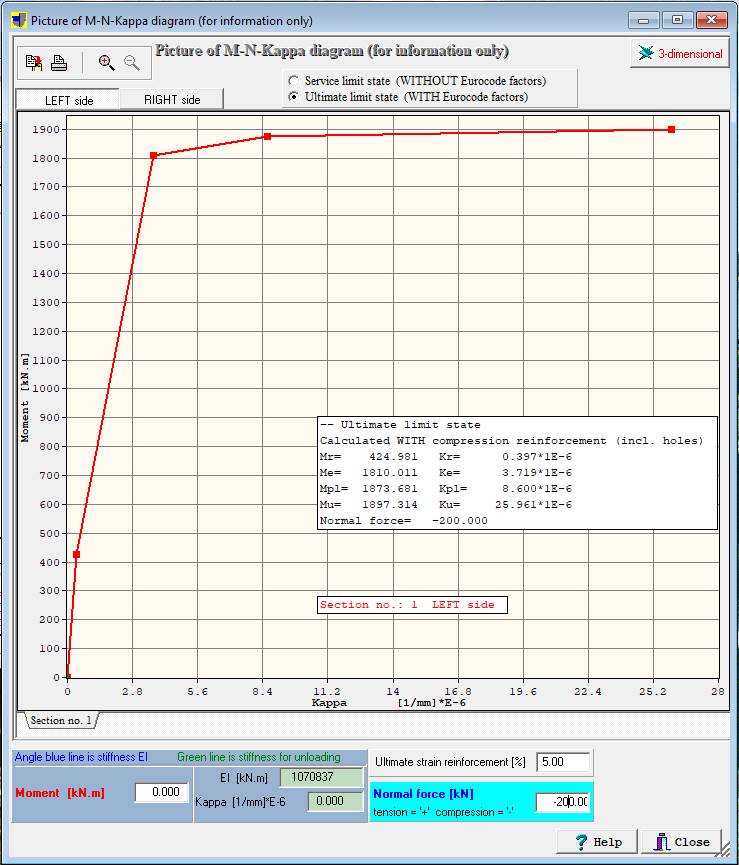 For a deterministic calculation the basic assumption is fixed values for the various input parameters.

For a probabilistic calculation the basic assumption is a probability distribution for the various input parameters (a specialty of PCSheetPileWall).

A deterministic approach is the usual method in practice.

In the program it’s possible for a number of variables next to the expectation value to enter the standard deviation for that variable; with which the variable has become a stochastic variable. The stochastic variables have a standard normal probability distribution; unless decided otherwise. For the SOIL properties the stochastic variable can have a NORMAL or LOGNORMAL probability distribution. The advantage of the lognormal distribution is that the regarding variable will have a value always larger than zero.  The soil strength properties in a physical sense cannot have negative values. For not to large standard deviations the differences between the normal and lognormal distribution are not so big.

The (ground) water levels at the left and right side of the sheet pile wall are allowed to have a non normal probability distribution.

Knowledge of the backgrounds of the probabilistic theory is very essential for the use of the program. 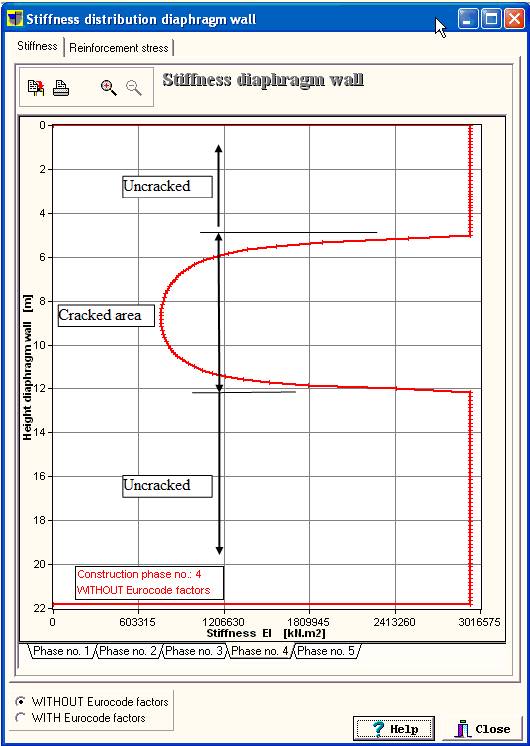 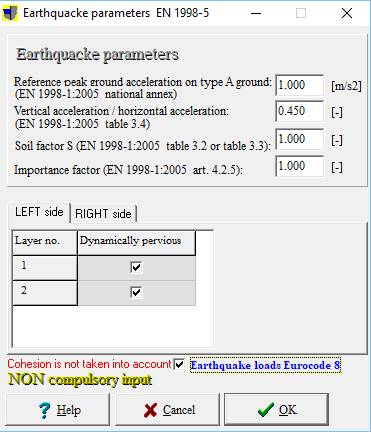